Louis was born on January 31, 1673 at Montfort-sur-Meu (25 km from Rennes) and baptized the next day. His father, Jean-Baptiste Grignion, was a lawyer and his mother, daughter of a magistrate in Rennes. Louis would later add the name of Mary to his because of his great love for the Virgin. The addition “of Montfort” is not a title of nobility, but just the name of the place of his baptism.

From his early years he exhibited great qualities: keen intelligence, deep piety, facility to share what he learned in Sunday school with his brothers, sisters and comrades.

At 12, he was a student at the Jesuit College in Rennes. He proved to be a brilliant student of philosophy, very conscientious in his work. He liked to take time to help his brothers and sisters in their studies.

His Life in Rennes opened to him a world he did not know: the poor. Guided by a priest, he visited the poor in hospitals. Following the example of his mother, he helped those who dared not show themselves up.

One incident, among others: A schoolboy was badly dressed and everyone made fun of him. Louis-Marie felt bad about this and made a collection among his companions. He brought him to a tailor and said: “Sir, this is my brother and yours. I collected this amount in the class in order to get him a proper dress. If this amount is not enough, you please add the rest!” The latter carried out the job.

On the advice of his teachers, he joined the Congregation of the Blessed Virgin, which was an opportunity for him to enlighten his faith and his Marian devotion.

In these times of prayer and reflection, a thought struck his mind: to become a priest. He shared about this inner call to his parents, who were very happy about it.

In September 1693 he left his native place, on foot, to join the Seminary of St Sulpice in Paris.

On June 5, 1700, Louis-Marie was ordained a priest. His desire was “to teach catechism to the poor of the countryside and to encourage youth to the devotion of the Blessed Virgin Mary”.

He was Chaplain of the General Hospital of Poitiers for 6 years. There he met Marie-Louise Trichet who took the religious habit on February 2, 1703 and became the first Daughter of Wisdom. He began to give some happiness to the 400 poor there, by going begging for food for them and by looking after the sick.

But in 1706, to put an end to the quarrels and jealousies, he left the hospital and went to Rome to visit Pope Clement XI, who said: “In France you have a large field for apostolate; teach with strength the Christian doctrine to the people and the children, make the renewal of the vows of baptism, and always work in perfect submission to the Bishops”. He received from the Pope a crucifix and the title of “Apostolic Missionary”.

Throughout his missionary life, he lived intensely united to Jesus and Mary, and his missions were a great success. He had an easy way with words, and the art of making his preaching practical and adapted to the people, the gift of touching hearts. He closed his missions by building a big Calvary in memory of the Lord’s love. The most famous is Pontchâteau, in Loire-Atlantic, which is even today a place of pilgrimage.

Montfort ensured the desire to perpetuate the results of the missions, through the establishment of confraternities, charitable schools…

From the beginning of his priestly ministry in December 1700, Louis-Marie envisioned a Congregation ready to go anywhere to teach catechism to the peasants, the poor, and the children. During his 15 years of missionary life, Montfort had priest collaborators like Mr. des Bastières or Gabriel Ollivier who accompanied him for several years, but were not so steady. Around 1712, in La Rochelle, he wrote a Rule for the Missionary Priests of the Company of Mary, a rule where teaching of catechism to the children has an important place. It was not until February 1715 that this Company had the first priest: Adrien Vatel (1680-1748), a young Norman priest, a former student of the Seminary of the Holy Spirit of Claude Poullart des Places, but he did not commit himself with vows until 1722. In September 1715, a young priest of the diocese of La Rochelle, René Mulot (1683-1749), despite his poor health, agreed to join Father de Montfort. He became the first Superior General of the Company of Mary in 1722.

In December 1701, Montfort met in a church at Poitiers, a young 17-year-old girl, Marie-Louise Trichet (1684-1759), who came to confession to him. Montfort had the intuition that God could do great things through her. He asked her in January 1703, to come and work at the General Hospital of Poitiers, as a servant of the poorest, and to join the Association of Wisdom led by a blind woman. On February 2, 1703, the daughter of the bourgeoisie received from Montfort a humble peasant’s gray coat and the name of Marie-Louise of Jesus. For 12 years, as a novice, she devoted herself in this general hospital which collected all those disinherited of life. In 1713, a companion joined her: Catherine Brunet. In 1715, Montfort asked Marie-Louise and Catherine to leave Poitiers for La Rochelle, to run a charitable school and to take care of the Saint-Louis Hospital. On August 1, 1715, Bishop Champflour approved the Rule of the Daughters of Wisdom written by Louis-Marie and reviewed by Marie-Louise. On August 22, 1715, Marie-Louise Trichet, Catherine Brunet, Marie Valleau and Mary Regnier made their first profession. Marie-Louise was appointed superior.

In 1705, in a church of Poitiers, Louis Marie asked a young man of 18, Mathurin Rangeard (1687-1760), to follow him. Mathurin became his constant companion in the missions and he continued this ministry until his death in 1760. Other brothers such as John, Peter, Nicolas, Jacques, Philippe, Gabriel, Louis, also joined Montfort to help him. At the Pentecost 1715, according to tradition, four of them, Louis, Philippe, Gabriel and Nicolas, pronounced their vows of obedience and poverty forming the nucleus of the Brothers of the Holy Spirit. Mathurin and Jacques, did not dare take that step, even though they were devout followers of Montfort. In 1715, Montfort, concerned with the pastoral plan of Mgr. Champflour, Bishop of La Rochelle, asked some brothers to work in the “charitable school” at La Rochelle (1715) and at Nantes. In his testament of 27 April 1716, Montfort gave a considerable place to the brothers and envisaged that some of them work in the charitable schools. 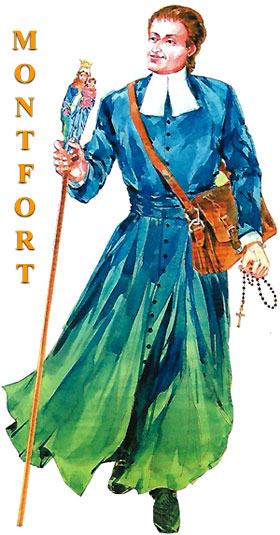